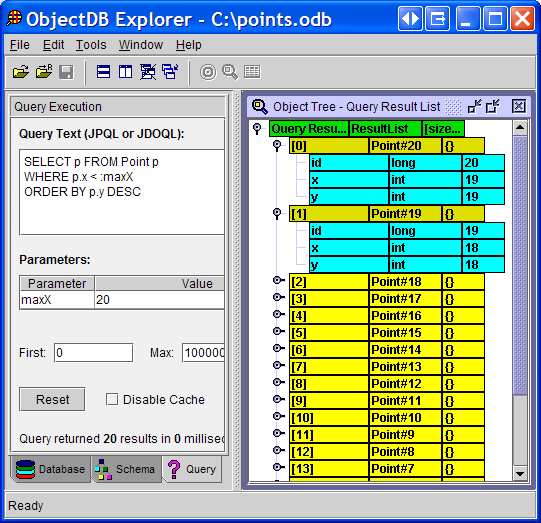 This page covers the following topics:

The ObjectDB Explorer is contained in the explorer.jar executable jar file, which is located in the bin directory of ObjectDB. It depends on the objectdb.jar file.

You can run it from the command line as follows:

If explorer.jar is not in the current directory a path to it has to be specified.

Alternatively, you can run the Explorer by double clicking explorer.jar or by running explorer.exe (on Windows) or explorer.sh (on Unix/Linux, after editing the shell file, setting the paths to the objectdb.jarfile and to the JVM).

Connecting to the Database

To open a database in client-server mode select File > Open C/S Connection... and provide host, port, username and password for a client-server connection. You also have to specify a database path on the server, possibly using the Browse button.

Three tabbed windows are displayed on the left side of the Explorer when a database is open:

Use the File > Close menu command to close a currently open database connection.

The Explorer provides two types of viewer windows for viewing the database data.

The Table window follows the approach of traditional visual database tools. Every row in the table represents a single object, every column represents a persistent field, and the content of a cell is the value of a single field in a single database object. This type of viewer is useful for viewing data of a simple object model.

In most cases, the Tree window, which is designed to handle more complex object models, is preferred. A Tree window displays objects as a tree. Every database object is represented by a tree node and the values of its persistent fields are represented as child nodes. Tree windows provide easier navigation. Because every reference between two database objects is represented by a parent-child relationship in the tree, you can navigate among objects by expanding nodes in the tree, similar to exploring objects in a visual debugger. Notice that the same database object may be accessed using different paths in the tree and therefore may be represented by more than one node. To help identify circles in the graph of objects, a special {R} sign (indicating recursive) is displayed for an object that is already shown in a higher level of the same tree path (i.e. the object is a descendant of itself in the tree).

The [Query] window on the left side enables execution of JPQL and JDOQL queries.

To execute a query:

On the bottom of the query window there is a log panel that displays the selected query execution plan. This is useful, for example, for checking which indexes are used.

The Reset button clears the content of all the fields.

When a database is open in the Explorer in client server mode, it can be accessed simultaneously by other applications. If the database is modified by another process the viewer windows in the Explorer might display cached content that does not reflect the up to date data in the database. In this case you can refresh the cache and the viewer windows using the File > Refresh Data menu command.

To bookmark an entity object for easier future access - first select it in a viewer window and then select the Tools > Bookmark... command, specify a bookmark name and click OK. Bookmarked entity objects can be accessed from the [Database] tabbed window.

The Explorer is used mainly as a viewer of databases but it can also function as an editor.

You can edit simple field values inline in the Tree and Table viewer windows. Double click the field, press F2, or simply type the new value. Use the Edit > Edit Multi Line String command to edit a multi-line string.

Reference fields can be edited using the following commands:

Field values can also be set using standard clipboard commands (Cut, Copy and Paste). For example, an entity object can be selected and copied as a reference into the clipboard (in any viewer window) and then pasted on a reference that has to be set.

The functionality of the Edit > Delete command depends on the context. Deleting a reference field sets the value to null without deleting any referenced entity object. On the other hand, deleting an entity object that is represented by a child of an Extent node in a viewer window deletes the object itself from the database.

Elements can be added to collections by using the following commands:

Elements can be removed from the collection using the Edit > Delete command.

The order of elements in an ordered collection can be modified by using the Edit > Move Element commands.

The Explorer settings are organized in the [Options] dialog box, which can be opened using the Tools > Options... menu command.

The [Fonts] page is used to set the appearance of different Explorer components. Select one or more elements on the left side and then use the combo boxes on the right side to choose font face, font size, font style, background color and foreground color. Click the Reset button to apply the default settings to the selected elements. To discard all changes and apply the default settings to all the elements, click the Reset All button.

In the [Views] page you can select the persistent fields that are shown in the viewer windows and their order of appearance. This may be useful when working with classes with a large number of fields where displaying all the fields is problematic (for instance, in a row in the table viewer).

To set a view for a class, first select one of the three supported views and then select the persistable class in the list of classes. You can change the visibility of persistent fields of the class (in the selected view) using the Left and Right arrow buttons to move fields between the [Shown Fields] and the [Hidden Fields] lists. You can change the order of the fields shown by using the Up and Down arrow buttons or the [Field Ordering] combo box. A view for a class can also be set by right clicking one of its instances in the viewer window (Table or Tree) and using the [Set View] context menu command.

Which JPA is Faster?

in the JPA Benchmark.